A duvet is a kind of bedding that is often called a comforter (especially in the U. S.) and is a gentle flat sack stuffed with feathers, wool, or a synthetic equivalent. The duvet is covered with a detachable cover known as the duvet cover.

It was constructed from feathers in Europe because of its function as a heat insulator. Adding a duvet to your bedroom makes your bed much more elegant.

The duvet cover is made from different materials including fabric to protect the duvet, but can you use the duvet cover by itself? Let’s explore your options.

Can you use a duvet cover by itself?

You can make do with a duvet cover by itself. A duvet cover is a typical thin layer of fabric, and they do not offer a great deal of comfort on their own. During summer days, when you don’t need insulation, the duvet cover can be used by itself, but you use the actual duvet during winter days.

A duvet is an essential component for a warm and comfy bed. But in the warmer seasons, instead, the duvet will become the elephant of your bedroom which means you will have to put it away. You have no option but to store the duvet in the “off-season closet.”

It would be best if you had something thin and practical during such days, and that’s where the duvet cover comes in.

Instead of buying an extra blanket or a light comforter, you can use the duvet cover by itself. By simply taking the duvet out of the cover and sealing it would enable you to use it.

Since the cover comprises two distinct layers, it may be used as a bed covering alone instead of a summer quilt or blanket. It may not necessarily be warm as a comforter or as a conventional blanket based on the material.

However, a flannel cover has a weight and a warmth quite comparable to a light blanket. A silk cloth may not warm the bed, but it will keep your moisture intact during cooler months while you sleep. 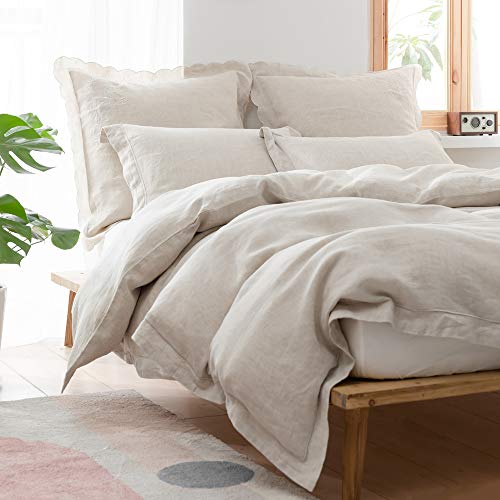 Do you use a duvet cover by itself?

Duvet covers are handy items and much cheaper than actual duvets or comforters. They change the décor immediately and are easy to clean. Making the bed is also easy because fewer layers are needed than sheets and blankets.

You can store duvet covers when not being used, yet they are helpful enough for year-round usage.

Does a duvet cover need an insert?

An insert should be placed over your bed and covered like a comforter with the duvet cover. However, you don’t need to use an insert with the cover. If you want, you can use the duvet cover without the insert.

While some duvet pads are filled with polyester, other duvets are filled with organic cotton and coated with wool. Wool is an excellent natural fabric due to its capacity to wipe the moisture away and keep you cool throughout the warmer months. 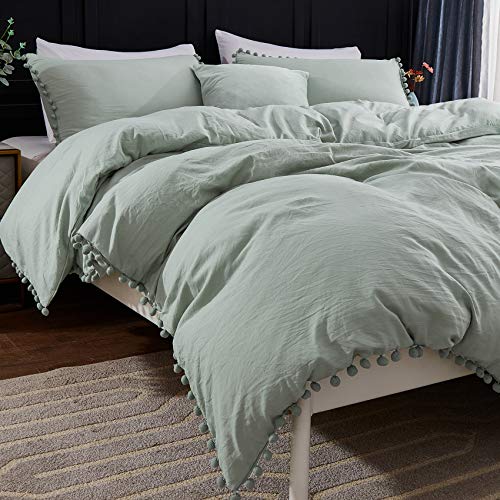 It’s exceptionally respiratory and, unlike synthetics, helps to regulate temperature. Because of such advantages, having an insert with the duvet cover is seen as a basic bedding rule of thumb.

Can I use a duvet cover without an insert?

Depending on the temperature of where you live, you can use a duvet cover without an insert. The insert is mainly needed for insulation from the cold as it is made out of wool, feather, and other similar materials.

If you feel having a fabric-made sheet as a covering for your body is adequate, you won’t be needing an insert.

Most people use an insert with the duvet cover. When the weather gets warm, they either take the insert out and use only the cover or bring a thinner blanket. If you’re short on budget, you can live using a duvet cover without the insert.

How to use a duvet cover by itself?

A duvet is a fabric cover filled with natural or synthetic fillers. It captures isolating air layers to help control the body’s temperature. Duvets work like blankets and are sufficiently beautiful to replace the bedspread. 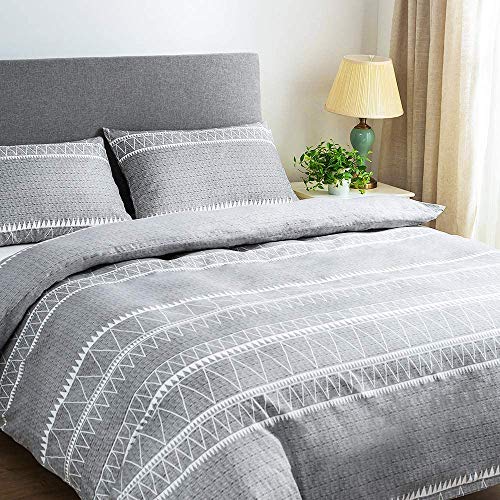 The cover is a soft cotton envelope containing the duvet and protects it from filth, dust particles, body oils, and moisture. You should invest in a duvet cover if you wish to utilize your duvet as a blanket.

It may seem strange, but it is a fantastic idea to use duvet covers as alternate bedding if you think about it. The mattress is protected with bedsheets; the duvet covers can also be used for preserving the duvet. So why not use them interchangeably?

The duvet covers may be a suitable option as both serve the same goal.

In warm months, a thick comforter may be too much to sleep beneath. You may replace the comforter with a duvet cover during the warmer months and can easily take it back when it becomes chilly again.

Whether you are in Hawaii, Florida, the Caribbean, or a warm tropical climate throughout the year, a duvet cover is an ideal choice for elegant beach bedrooms and tropical heat.

Duvet covers can be used as a bed cover as well. As the duvet cover comes in unique design and material, you can genuinely elevate your bed’s aura. If you get tired of the style, you can easily replace it with something different as the covers can be bought at a reasonable price. 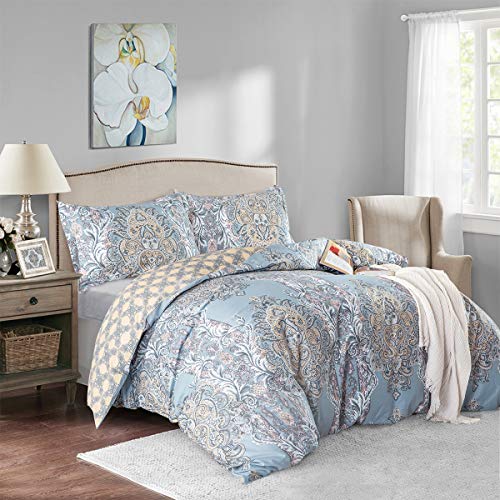 What is the point of a duvet cover?

As duvets and comforters are costly and challenging to wash, duvet covers are a good investment. They protect your bedding while in use and are simple to remove and wash once you are finished.

You may also quickly and alter the appearance of your bed and the room without having to remodel by using duvet covers fully.

If possible, the duvet should be tucked away within a duvet cover that can be removed and cleaned as necessary. The duvet cover also makes it easy to alter the look and color of your bedding by simply switching out the cover with a new one.

This makes it simple to go from one season to another. The purpose of the duvet cover is to protect the insert from any damage. In addition, having a cover helps with the washing, and you can use the cover separately as well.

How do you put a duvet cover on a duvet?

To start off, invert your duvet cover so that the inside is facing out, then spread it over your mattress, with the opening near the foot of the bed, to keep it from shifting. Then place your duvet cover underneath the duvet and close the cover.

To assemble your duvet cover, begin at the top of the bed and wrap them together into a burrito. Having a partner makes things easier, but you may alternate between sides as you work if you don’t have one.

As soon as you’ve rolled your “burrito,” wrap the opening of the duvet cover around the bedding. Close your duvet cover using the ties, buttons, or zippers that are included. As you reach the top of the bed, begin to unroll your “burrito.”

After that, fluff it up a little more. Your duvet is safely tucked away in its cover. 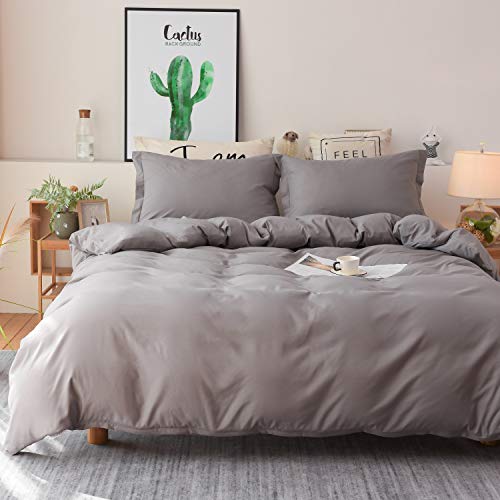 How to use a duvet cover in summer?

A down blanket is an attractive option for the summer for those wanting to chill down a bit. Down blankets are cheap, don’t have a cover, and are cleaned at home quite simply. You can use the duvet cover with the blanket to keep the style of your bed intact.

Some people prefer having two different duvet inserts, one for summer and the thinner one for hot and humid days. You can also go for a single-ply mattress when the temperature rises.

Another way you can use a duvet cover in the summer is by itself.

How can I make my duvet cover fluffy?

Place your clean and dry duvet on your bed to fluff it. Distribute the fill as required. Smoothen the lumpy regions using the palm of your hand and arm.

Then reverse your duvet cover for even wear. Repeat if the cover is reversible. Alternately, store an additional bedding set in a closet for six months.

Your comforter will last longer, and you can change the appearance of your bedding. 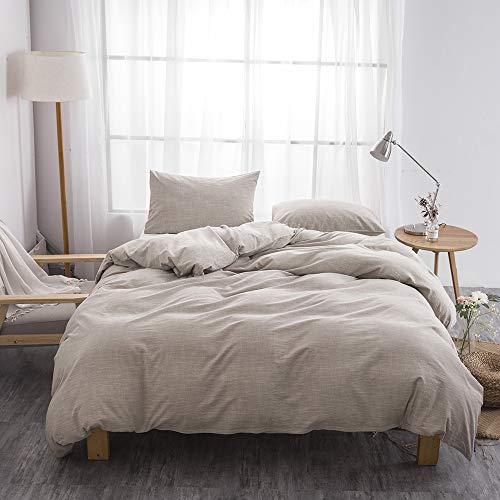 How long do duvet covers last?

In short, you can use a duvet cover by itself. A duvet cover is a typical thin fabric covering that does not provide much convenience alone, but it can be used without the duvet insert during the summer. But during the cooler seasons, the duvet cover won’t offer you much protection from the cold.