Repairing cast iron could require a lot of effort. A newbie may have difficulty in using the age-old method of welding. It is not always easy to achieve with welding if you don’t have the expertise.

For ease, there are some ways where you can fix cast iron without welding.  One of them is JB weld.

We will be discussing the strength of the JB weld and how effective it is on cast iron. Stay for more information.

Can you repair cast iron with jb weld?

It is possible to repair cast iron with a JB weld. They serve as glue, adhere to cast iron, and seal the crack effectively. The process does not require welding and is easy to accomplish. Additionally, it creates strong bonding when repairing. The elements in JB weld are the resin and a hardener.

JB weld is compatible with cast iron. Not only does it simplify the task of repairing cast iron but allows sturdy bonding. The tensile strength of JB weld on cast iron is 3960 PSI.

Within 15 to 24 hours, it reaches full cure. The bond hardens overnight. When fully treated, it can withstand 550 degrees Fahrenheit. We will now be focusing on three problems of cast iron and how to repair them with JB weld.

When an engine block develops a crack, we can use a JB weld to seal it. It can also prevent the damages from leaking coolant or sucking in the air inside.

Usually, the two elements that make JB weld are resin and a hardener. The hardener solidifies and creates a robust bonding with cast iron. The mixing of these two materials forms a sealant. One can use it to repair damages.

To work on old ones, one needs to remove the paint, primer, or rust from the surface by sanding and cleaning. JB weld adheres to the cast iron radiator well.

Once again, we can use JB weld in repairing a cast iron pipe or drain pipe. It will stick sturdily to the system. If you observe any crack or hole in the cast iron pipe, you can use this as glue and do not need to worry about welding.

JB Weld, especially with drastic heat, is perfect for fixing repairs on cast iron exhaust manifolds. You can also use it on mufflers, exhaust pipes, catalytic converters, engine blocks, fireplaces, smokers or fireboxes, and many more cracks that are prone to damage.

Yes, JB weld works on cast iron. We may consider it one of the best epoxies when mending cast iron issues. It can adhere well to cast iron. Again, the cracks get a safe seal.

JB weld is an epoxy glue. It works exceptionally when bonding to cast iron. The JB weld also works well with steel and several other materials.

Using epoxy on repairing cast iron is considered the easiest way. It is because cast iron is difficult to weld, though not impossible. If you do not have the proper expertise, you may wind up with improper welding. It also requires safety.

In contrast, JB weld not only offers a robust output but is easy to handle.

JB weld is also known as a liquid weld. The best type of liquid weld is the cold-weld type. The two major elements in JB are weld a hardener and resin.

When a crack develops on the cast-iron block, use a JB weld to seal them up. It also prevents the holes from leaking coolant and sucking in air.

We already mentioned that JB weld is a type of epoxy. It helps heal and hardens and close cracks.

JB weld elements are resin and hardener. When they mix, they will form a sealant. It is used on the damaged area as well. The hardener begins to solidify inside the resin. The epoxy arranges a solid weld around and also inside the damaged area.

To fix a crack on cast iron, get the JB weld. There are other good brands as well on the market.

Now take a good amount, spread the epoxy onto the cracks evenly. It will take almost a day to cure it completely. Once the treatment is done, you will find the bond to be strong.

How strong is the jb weld on cast iron?

JB weld sturdily adheres to cast iron and repair damaged or cracked cast iron. The tensile strength of JB weld on cast iron is 960 PSI. When the mixture is applied for fixing, it takes almost 15 to 24 hours to cure completely. The bond hardens overnight.

The temperature it can withstand is 550 degrees Fahrenheit when treated.

JB weld is a type of epoxy. It assists in fixing and setting the holes and closing cracks on cast iron objects. The two main elements of JB weld or other similar types of the liquid weld are resin and a hardener. They form a strong sealant when mixed together.

To repair the damaged area, the hardener element hardens inside and around. It forms into a strong solid element

The best type of liquid weld is the cold weld. Apart from JB weld, there are other good brands in the market.

How to use jb weld on cast iron? How to repair cast iron with jb weld?

Here we discussed how to use JB weld and techniques to repair cast iron with jb weld.

JB welding on cast iron is one of the best methods to repair issues. It is an effortless technique, easy to follow, and effective. Additionally, the application is also easy. All you need is the JB tube epoxy from the market.

Before applying to the cast iron, make sure you sand and clean it to remove any rust or painting. Now put an even layer onto the damaged area like you apply glue. The weld will harden over time, creating a robust bond and fix.

Fixing cast iron JB weld does not require you to do the difficult technique of traditional welding. Even a newbie can do it. The probability of making mistakes is almost zero as the application and process are easy.

You need to get the JB weld tube or product from the market. There are other brands as well. They work fine as well. However, our discussion is on JB weld only.

Before putting JB weld, you need to sand and clean the rust and paint from the cast iron. Apply the JB weld paste evenly on the part of cast iron you have to repair.

For a crack, put the paste over and around the hole. Over time it will harden. If you need to join some parts, apply the paste and connect. Once solidified, it will unite effortlessly.

How to fix cast iron without welding?

Welding cast iron though not impossible, but is quite arduous. A rookie may not get a hold of it. The chance of making mistakes could be more.

Nevertheless, using an epoxy-based glue weld, you can perform the task effortlessly and effectively. Here we have brought three different ideas on fixing cast iron without using the welding method.

It is an ideal way to mend cracks on cast iron. Also, it does not require welding. The technique implements specialized inserts. It connects the damaged metal no matter what and how the crack is. The different pieces of the cast iron are laced up using cold metal stitching.

It is once again an easy method to follow. You can avoid the traditional welding process here as well. Instead, you can use epoxy glue such as JB weld to repair or fix the cracks on cast iron.

They allow strong bonds and easy application. All you need to do is get the appropriate epoxy. After sanding and cleaning the cast iron, apply the JB weld evenly onto the spot. It will cure within 24 hours. 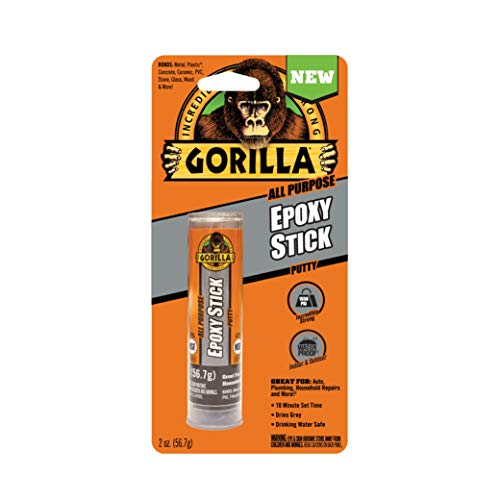 Another effective way you can fill the cracks of cast iron is the brazing technique. Again, it requires minimal heat to repair metals. You need a filler rod in this method. The rod is brass or nickel.

Epoxy glue or liquid weld such as JB weld is one of the easiest ways to fix cast iron issues. Using this method, you can avoid traditional welding that requires hard work and expertise. JB weld on cast iron allows a strong bond.  It adheres to metals and cast irons and seals the cracks effectively.