Towels are one of those necessities that every household needs. And to determine the right one for use, it is necessary to know the weight of a dry or wet towel. This will help in the optimal use of hooks and where they are to be used.

How much does a dry & wet towel weigh?

An average bath towel weighs around 1.54 lb. when completely dry and around 3.31 lb. when wet. The weight of the towel mainly depends on the length of the towel and how absorbent the towel is. A longer towel will weigh more while a more absorbent towel will get heavier as it absorbs more water.

Towels can be categorized into small, medium, and large towels based on their sizes.

Washcloths, finger towels, and hand towels belong in the small towels category. These usually weigh from 3-12 oz when dry. So, an estimated weight of a wet small towel would be from 4 oz to 14 oz.

Bath towels belong in the medium towels category. A dry bath towel weighs about 1 lb. and 8 oz when dry and about 2 lb. when wet. However, the weight of towels with different materials may vary.

In the large towels category, are bath sheets. They are heavy and weigh about 2 lb. and 3 oz when dry and about 3 lb. to 4 lb. when wet. A thicker and more absorbent bath sheet will have a heavier weight.

As mentioned earlier, the weights of the towels may differ from the expected weights due to the different materials that are used to manufacture towels. Also, because of how absorbent the material of the towel is, the weight of the towel observed may be different.

How to measure towel weight?

If the GSM (gram per square meters) of the towel is known as well as the dimensions of the towel, the weight of the towel can be easily calculated by following these steps:

Finding out the GSM and dimensions of the towel:

Converting the length and width to necessary units:

Normally, the dimensions, if given, are provided in inches. However, the calculations require the dimensions to be in meters. As a result, the inches need to be converted to meters in a simple step.

To convert the length and width dimensions obtained in inches, simply divide the value by 39.37. This will give the length in meters and then, do the same for the width. As a result, dimensions in meters will be obtained.

Finding the surface area of the towel:

To this, simply multiply the length and width that is calculated in meters. This will give the surface area of the towel in square meters. 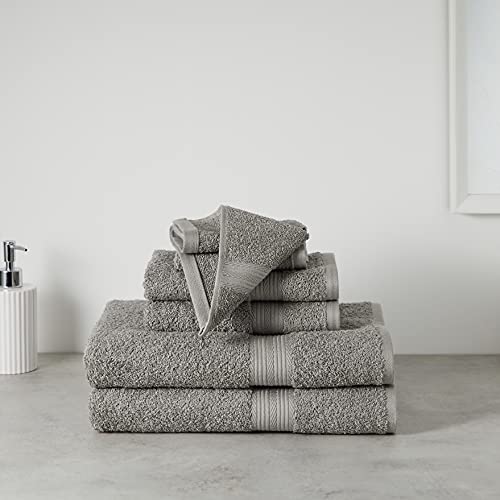 What sizes do towels come in?

Most washcloths are 13’ by 13’ while others measure about 12’ by 12’. It is considered to be the smallest towel among all the other towels.

Since these have a really small size and are square in shape, they are perfect for cleansing the face and also for washing the entire body after a shower.

Finger towels, unlike the washcloths, are rectangular in shape and typically measure about 18 inches long and 11 inches wide. Finger towels, also known as fingertip towels, are generally used for decorative purposes.

Additionally, the small width of the towels makes them easy for use in smaller washrooms and by guests and can also be rolled or hung for decorative purposes.

Hand towels are slightly larger than finger towels as they are usually 16′ by 28′ and 18′ by 30′. Hand towels are mostly used in washrooms and in the kitchen to dry hands.

Having the larger variant gives the extra room for completely drying the hand and face and, similar to finger towels, can be folded or hung for decoration.

Due to its size, it works well with kids and young adults. Also, the smaller bath towels can be used in drying the hair, especially thick or long hairs, and the longer one can be used for drying the body.

The largest in the towel family are the bath sheets, measuring about 35′ by 60′ and 40′ by 70′. Bath sheets can be considered oversized bath towels but are usually more fluffy, comfortable, and more absorbent.

These are usually used in the master washroom or large washrooms and are used for drying and covering the whole body after a bath or shower.

Yes, wet towels do weigh more. Towels when dry do not have any additional weight or mass other than their own. But when it is wet or soaked with water, the absorbed water increases the weight of the towel.

The difference in weights when a towel is dry and wet may vary slightly or at large. The difference depends on the material of the towel, how absorbent the towel is and how long or how much surface area the towel has.

It should also be noted that towels that have a high GSM will be significantly heavier when it is wet than when it dry. A higher GSM towel will be more absorbent and fluffier than a towel with a lower GSM.

Can a command hook hold a wet towel?

Assuming, the wet towel is a standard bath towel, and it is wet, it may weigh about 2 lb. which a small strip of command hook can handle quite easily.

If there are wet bath sheets that need to be hung, then a large command hook strip is suggested. A wet bath sheet may weigh around 4-6 lb.

The weight of a towel, wet & dry, can be around 3.3 lb & 1.5 lb. But it largely depends on the absorbency of the material and the dimensions of the towel itself. A more comfortable, fluffier, and absorbent towel with a higher GSM will weigh more than a towel that is thinner and has a lower GSM.